Imagine what it was like to live in the
Village of Grantsburg during the turn of the 20th century! 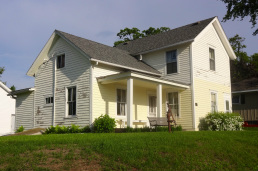 Visit the family home of the local blacksmith and explore furnishings from the early 1900's!
"Emma's House" was the home of Alex Stenborg, his wife, Matilda,  and five children, one of whom was Emma.

Alex Stenborg came from Sweden in 1872 and worked as a blacksmith in Grantsburg.

His daughter,  Emma married Charley Olson in 1917 and they lived in the house with their three sons, Paul, Wesley, and Lowell. Shortly after Emma died in 1989, her three sons gifted the home to the Grantsburg Area Historical Society. 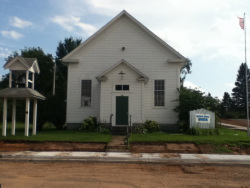 Discover the village and surrounding area's history through the museum displays. The exhibits change every 2 years, showing off a large collection of the area's history.
The Grantsburg Area Historical Society Museum was originally the Norwegian Methodist Church built in 1897. The building continued as a church for the Grantsburg Tabernacle and following World War I, as a clubhouse for American Legion Post #185. The Grantsburg Area Historical Society purchased the building in 1976 to use as a museum. 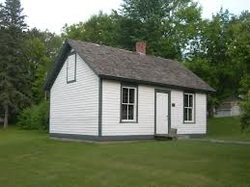 Grantsburg became the seat of Burnett County government in 1865 and the jail was constructed five years later in 1870.

The jail was first located on the corner of Pine Street and Broadway Avenue, moved to the old courthouse lot in 1887, and finally to its present museum location in 1989.

The jail, measuring 16 x 24 feet, was constructed of sawed eight inch square timbers. The ceiling and floors were four inches thick and iron bars on the windows and doors made for a secure confinement. The small jail contains three windowless cells. It was used until a new two story brick jail was constructed. 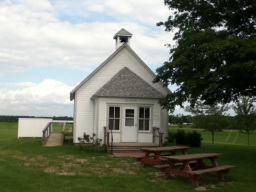 In the fall of 2006 the Reed School was moved into Grantsburg and placed on the school campus.

The building had been used for years as the West Marshland Town Hall and because the township was constructing a new facility it was given to the GAHS.

Since renovations were completed in the spring of 2007, local students and many other visitors have enjoyed taking a step back in time by visiting a late 1800's classroom.