In cooperation with the BID, GAHS created a self guided walking tour of historic Grantsburg.  On the tour you will see the Wedin House, Abstract Building, Methodist Church, Olive Fremstad's gravesite, and the Big Gust statue. Also on the tour are the rural school, the original Burnett County Jail, the Museum, and the turn-of-the-century home called "Emma's House." You will find only the former site of the roundtable, Saunder's livery stable and the Hickerson Roller Mill. Please respect the private property included in the tour. Be especially mindful of the privacy of the family that now calls the Wedin House home. Take a trip back in time as you explore our scenic town. 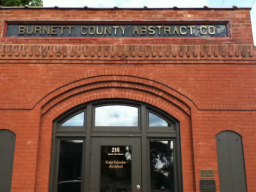 The Abstract Building, a brick structure with the fire-proof vault, was constructed in 1908 to house the land records of Burnett County Abstract Company. The bricks came from the local brick factory and the trim paint from the local Canedy Paint Factory.
The Burnett County Abstract Company was formed in 1906 with Harry D. Banker from St. Croix Falls being the first president and major stockholder. [ Other stockholders include Wm. Anderson, A.P. Nelson, S. Thoreson, Andrew Peterson, S.F. Grover, and A.J. Myrland.] Despite the business changing ownership in 1916 (Byron Selves), 1944 (Donald and Richard Elg) and 1971 (Richard McKeag), the building was occupied until 1978 when it was moved to a larger building constructed just to the north of the historic structure.
The building is on the National Registry of Historic Places with its facade maintained as it was in 1908. It is now part of the offices of local architect, Craig Selander, who ownes the building. 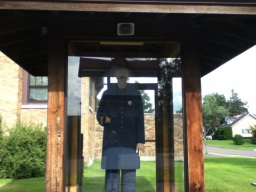 Anders Gustaf Anderson, known locally as "Big Gust" was born in 1872 in Sweden. He immigrated to America with family and settled in rural Grantsburg.  Gust, who grew to the height of 7' 6" and weighed 325 pounds, became a U.S. citizen in 1902.
His career included being a police officer in Superior, Wisconsin. He became the Grantsburg Village Marshal in 1902, serving for 25 years in that position in addition to other duties such as assessor, street commissioner, dog catcher, lamp lighter, and fire fighter. Legend has it that Gust, while Marshal, picked up two rowdies by their collars, one in each hand, and carried them to the village jail, holding them at arm's length off the ground.
Big Gust is remembered as a big-hearted, gentle man, one who was never known to say anything to hurt anyone's feelings. He died in 1926 at the age of 54 of pancreatic and stomach cancer.
The Big Gust statue was carved from laminated basswood by Alf Manley Olson and dedicated in 1980. Big Gust is buried in Riverside Cemetery.
More details and stops will be added soon